App for mentoring and connecting with people in the workplace 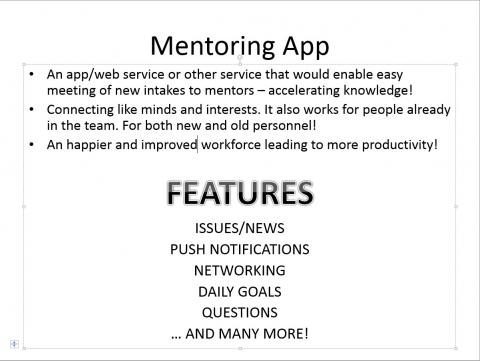 The idea presented here is an application that would make it easy for new people joining the workplace to easily connect with people of like interest and background in the workplace (in which CERN is an example). CERN has people from different backgrounds, cultures. It sometimes is difficult and challenging a task for new intakes (students, fellows, staff or any variety of programs available) to fit in the environment they find themselves. These challenges can be ranging from having never been in Europe (e.g. coming from a minority country, difficulty in finding country nationals or people that speak their language), civilization clash or general introverted. Therefore, settling down and blending in the new environment becomes an issue then. These conditions can be devastating and far-reaching. It could lead to low morale or even depression and stress. One could easily be overwhelmed by the sheer volume of activities and happenings going round.

These challenges have been identified and what is proposed here is an app that if implemented would go a long way in reducing the aforementioned problems. New intakes after signing up would be shown members that are closest to them be it by mutual interests (e.g. Big Data, Python), nationality or languages (Oriya, Hausa, Lithuanian), social activities (skiing, hiking, badminton), religion or any area of human endeavour in which you could find mutual interests. It could even be love for collecting ants!, currencies, stamps, great speeches. This would not only make new intakes feel at ease but also lead to a happy workforce. The good part is that it is not limited to new intakes only but also established personnels thereby making it a tool for all. The better part is that after connection has been made with someone, the app wouldn't be needed anymore since both parties can easily make arrangements on how to be keeping in touch.

The chain effect of this is that more connections would be made as a contact can introduce to another and another and... The app is not for one minority or group but for all people irrespective of their race, backgrond, colour or affiliation.  A beautiful aspect about the project is it can get (has gotten?) the nods of the CERN management and hence could (would?) be integrated into CERN making it an official application and bringing glory to its creators.

The basic goal during the weekend is to create a working prototype. This would serve as a proof of concept and it can be further extended, modified or made better with time. Everyone involved in the project would be credited and made mention of.

On Indico are the slides I created for a lightning talk where I presented the idea for the first time to members of OpenLab and Information Technology group - http://indico.cern.ch/event/373062/contribution/16/attachments/742721/1018837/Mentoring_App_Mufutau_final.pptx