The ‘CERN Webfest’ — CERN’s annual hackathon based on open web technologies — took place last weekend. Due to the COVID-19 pandemic, the event was held online for the first time. Over 400 people signed up for the event from 75 countries across the globe.

Held each year since 2012, the Webfest brings together bright minds to work on creative projects. Participants work in small teams, often designing web and mobile applications that help people engage with CERN’s research, physics, or even science in general.

The theme for this year’s event was ‘working together apart: accelerating collaboration’. Given the global COVID-19 crisis, the organisers were particularly keen to see projects that address the evolving ways in which we work together. Building on CERN’s strong history of international collaboration, the Webfest provided an excellent opportunity to create tools to support the changing ways in which we do science.

Examples of projects developed over the course of the weekend include

the following: an online detective-themed science show for school children, a web library of LaTeX equations, an app to assist with urban planning at large research centres, a platform for sharing remote access to lab equipment, a learning-management system, and a machine-learning program to help prevent social-media content from exacerbating depression. The projects listed above are just the six shortlisted projects from over 30 submitted. “The CERN Webfest was the best experience of my life,” says Ashraful Alam Khan, one of the two final-year high-school students from Bangladesh behind this last project. “It was fantastic to be selected as one of the finalists”.

Naturally, many of these projects are still at an early stage of development. However, guidance was offered to the participants about how they could take their projects further over the coming weeks and months. The Webfest organisers will be following all of the projects with interest.

A panel of 12 judges, representing a range of organisations, selected an overall winner from the event. They picked a team that is developing a platform to digitise electrocardiograms of COVID-19 patients, with a view to helping medical researchers better analyse this data. “The Webfest provided us with an opportunity to inspire others and to be inspired ourselves; the event helped us to believe that — through our hard work and dedication — we can work together to change the world for the better,” says Sina Khezri, project leader and a medical student in Iran. His teammate Arjeta Semani, from Kosovo, agrees, saying: “It was a great experience that will last in our memories for a long, long time.” The other members of this team were Ayush Parhi from India and Ali Fele Paranj, also from Iran.

Watch the announcement of the Webfest winners.

“Selecting the best projects was not an easy task for us judges, as the amount of creativity, innovation and originality offered by the Webfest 2020 participants was fantastic,” says Jean-Pierre Reymond, Chargé de Mission, Head of Innovation Partnerships at the Permanent Mission of Switzerland to the United Nations, Geneva. “The event was a great demonstration of how collective intelligence can be productive and cooperative.”

‘It was a privilege being part of the jury for this year’s Webfest,” says Charlotte Warakaulle, CERN Director for International Relations. “The quality of the projects was impressive. The participants demonstrated great creativity and understanding of the broader societal challenges that we are trying to address together, all of them showing how much we can really achieve when we work across boundaries for common goals. Any good idea needs to be nourished through exchange to be turned into truly transformative action.”

While the projects worked on formed the core of the Webfest, there was so much more to this year’s event. Six workshops were held across the weekend, during which experts from CERN shared important skills and insights with the participants. Highlights included a talk from CERN’s head of computer security, Stefan Lüders, on staying safe online, and a talk from Manuella Cirilli of CERN’s Knowledge Transfer group on how to give good presentations. Members of CERN’s yoga and fitness clubs also provided online exercise sessions, and an online DJ set was organised for the close of the event.

Altogether, this made for a rich programme spanning the entire weekend. “I really enjoyed taking part in the Webfest,” says Sarah Catherine Johnston, from the University of St Andrews in Scotland, UK. “I had never taken part in a hackathon before, and it wasn't quite like I had imagined, but only in the sense that it was a lot more fun and flexible than I thought it would be!”

Watch the end-of-hack session, at which all projects were presented, here.

The CERN Webfest was organised by members of CERN openlab and gluoNNet, an evidence-based analysis provider founded by physicists from CERN. Additional support was provided by members of CERN’s HR department; IR sector; THE Port, which organises an annual humanitarian hackathon at CERN’s IdeaSquare; and Remotely Green, a start-up company created by CERN users that specialises in virtual networking.

The hackathon was managed using a custom-built application; this was used to select projects, form teams, and communicate with the participants throughout the event. It was very important to connect this app — originally developed for the recent VersusVirus hackathon — to existing tools used at CERN, such as Indico and Mattermost, explain Daniel Dobos and Karolos Potamianos of gluoNNet.

This video shows all the locations across the world  from which people took part in the CERN Webfest. Visualisation by co-organiser and mentor Dan Lemon.

“It was a memorable time for all the participants, including the organisers and judges,” says Ben Segal, Webfest co-founder, who also helped to organise this year’s event. “I saw lots of talent, learning, energy and engagement displayed from all corners of the globe. And in the true Webfest spirit, everyone had fun!”

We would like to thank everyone who participated in this year's special Webfest edition, as well as all the mentors, judges and partners who made the CERN Webfest 2020 happen and be such a great experience!

Our panel of judges:

Congratulations to the winning team, the 6 finalists and all the participants for their efforts and achievements in such a short period of time!

Machine learning, how does it works? 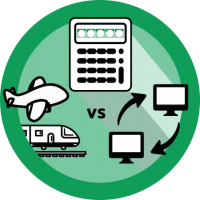